A fresh foot of snow fell in the backyard last night.  We're only a little month into the season and the snow keeps a comin!

Pete takes a look at some fire extinguishers which are being made into a table base.

Bryan and SPX work on the lettering for the Arts Summit banners.  The Arts Summit has been moved to Feburary 2, and is still being held at the

And the day is finished up with some healthy food on the table!

Posted by trenton atelier at 5:11 PM No comments:

getting down to bare earth

Posted by trenton atelier at 4:38 PM No comments:

For those who are unfamiliar with Trenton and the Wire Rope District, here are some aerial photographs of the site.

Our forward-thinking proposal is to reconsider the development of the 4 story Clark Street Rope Shop, which is part of Project 23 - “Roebling Block 3” in grid F07 of the City of Trenton Development Projects Map. Rather than converting the warehouse into residential units with amazing views overlooking other abandoned buildings, extensive parking lots, a railroad, a highway, and an arena, this 4-story, windows on all sides buildings could be converted into a vertical farm, this first of its scale in the country - an eco-tourism magnet and green-jobs creator for local Trentonians.

The vertical farm/indoor agriculture approach being developed all over the country, with a successful warehouse conversion called SweetWater Organics operating in Milwaukee - producing fresh mircrogreens and kale, as well as a number of fish species. “Sweet Water Organics is an urban farm located in the Bay View neighborhood of Milwaukee that has re-purposed unused industrial building space; growing fresh, safe produce and fish for local Milwaukee residents, restaurants and groceries." The following pictures show the SweetWater Organics warehouse conversion and growing operations underway. http://sweetwater-organic.com/

Plus, there would be local buyers for the produce - Roebling Market, local restaurants, and potentially another business who may be moving in to another nearby converted warehouse. The below image shows just how close these locations are - drastically reducing shipping costs and transportation losses of the produce.[[posterous-content:pid___9]]

According to a 2007 analysis by the City of Trenton, 30% of the total vacant properties are owned by the City, and the City owns over 2700 vacant properties, meaning there are over 4500 total vacant properties in the City of Trenton. There are many other housing options available in the downtown area, including high-rises and other housing projects that were abandoned in 2008 that could be completed before this warehouse is converted into even more unused housing stock.
The market for housing, especially luxury condominiums like the ones currently being proposed for this building, are probably the last thing Trenton needs or wants. These luxury condominiums will probably not be fully occupied, if ever. The views from the building are of the RiverLine railway, major highway Rt 129, a Sports Arena, parking lots, low-income neighborhoods, and other dilapidated abandoned warehouses.

Posted by trenton atelier at 10:35 AM No comments:

A quick check-up on Building 114 and the B Home revealed recent activity at the former industrial building, whose primary use has now become a storage area for dirt from the motocross events at the Sun Bank Arena.

Graham and Bryan man the FireBowls outside the New Hope Arts Center at the Fire and Ice Ball.

Crazy bearded man carved a sculpture from 5 blocks of ice at the event.

Pete discovered someone left the A/C on in the bathroom downstairs...

Bryan works on a design for a rather interesting PineApple FireScreen.

Posted by trenton atelier at 1:54 PM No comments:

Terracycle stopped by to create a cigarette butt collection unit made from old fire extinguishers.

Bryan performed some engraving on plagues for some sculptures to be auctioned off at the Trenton Saint Patrick's Day Parade fund raiser at Notre Dame High School.

While gram worked on the B Home. design.

Posted by trenton atelier at 6:09 PM No comments: 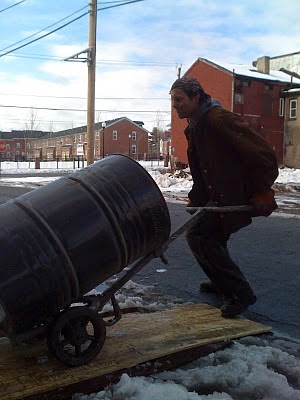 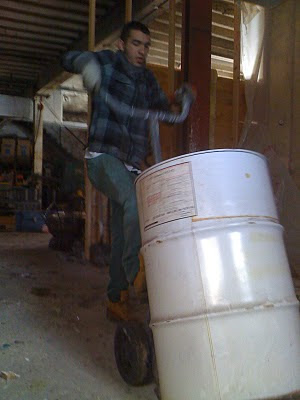 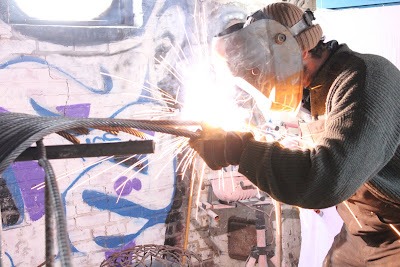 Bryan working on Ebb and Flow

now on view at the Princeton Environmental Film Festival
Posted by Trenton Atelier at 5:52 PM No comments:

Eco-sculpture at the Princeton Library

Pete puts the finishing touches on his sculpture "Spring to Life"

Posted by trenton atelier at 7:03 PM No comments:

Yet Another Busy Day 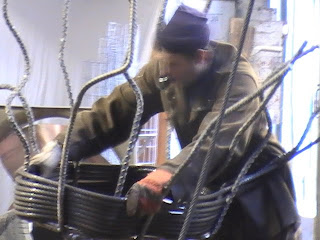 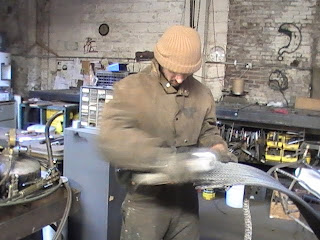 Bryan grinding away at one of the sculptures. 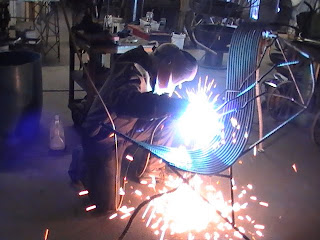 Weldy weldy weld...
Hey, it's Dox again. The shop was teeming with life today as the little worker bees buzzed around doing the things that we do around the shop. Both Pete and Bry were working on some abstractions for the Environmental Film Festival that's coming up tomorrow. I was up and down making jewelry when my friend Andrew posted a status on his Facebook that read: "SNOW PHOTO SHOOT ANYONE?????" Having extensive space at the shop, I decided to hit him up. A few hours later, there was a great shoot featuring some of our friends and some of my jewelry. Keep your fingers crossed for the Trenton Arts Summit and the Environmental Film Festival.

Posted by trenton atelier at 8:10 PM No comments:

walk in the woods 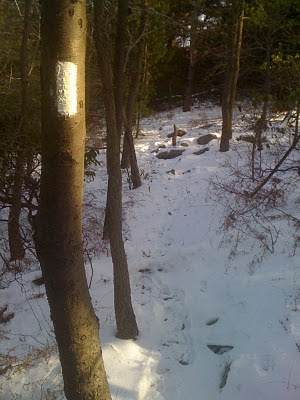 Pete took a hike on the Appalachian Trail yesterday,reminiced about his brush with hypotermia when he was 16, and got his nature on.

Now its back to the grind, getting pieces ready for the Princeton Environmental Film Festival, staying a foot ahead of the snow and generally just trying to stay warm
Posted by Trenton Atelier at 8:56 AM No comments:

A stop by the Small World Coffee roastery last week - picked up some brown gold... yeah... and a bag full of coffee husks (dunno what we'll do with them yet)

We then swung by the Double Brook Farm to size a firescreen (The Meat Screen) for a rather large and shallow fireplace.

See the full gallery on posterous
The firescreen will be designed so as to throttle back the top of the opening, preventing smoke from blowing back into the room.

We also took a look at the brand-new farming operations out back - 200 head of cattle, new barns, and bio-diesel powered equipment.

Above Pete takes a look-see at the hay-lift tractor stacking some bayles for the next few months of winter.

Finally, on Saturday the Princeton EPICS class presented on the B Home.

Some more work is needed on the fine details of the design, but progress is definitely being made.

Stay tuned this week - many updates to come as we clean up and organize the shop, prepare some artworks for the Princeton Environmental Film Festival, rebuild the HeliShuttle frame (maybe), and welcome some new members at the Atelier.

Posted by trenton atelier at 10:06 PM No comments:

A wonderful surprise in the mail
Marc Linowitz
Of the Rose and Louis Charitable Foundation
Dropped some seed monies our way
This will be used to formulate a partnership plan with oursep and the Trenton Board of Education to provide a space to explore ,experiment and exhibit

The Linowitz Foundation has been a dedicated and generous supporter of childrens activities in the Trenton area for generations.
Thank you
Posted by Trenton Atelier at 1:13 PM No comments:

See the full gallery on posterous
Posted by trenton atelier at 10:04 AM No comments: