a list of the ongoing projects at the Trenton Atelier

HELP- hyper efficient living pods : a structure to enclose a habitable space, deconstructing the concept of domicile to most basic elements.


algorithm van a precision mass transit system , utilizing current technology,(ie,gps and triangulation on cell phones) would be able to provide transportation to and from actual destinations.


just four to start,
Posted by Trenton Atelier at 2:16 PM No comments: 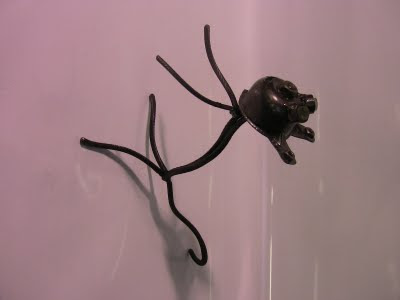 Posted by Trenton Atelier at 7:27 AM No comments:

phillippe working on his dog 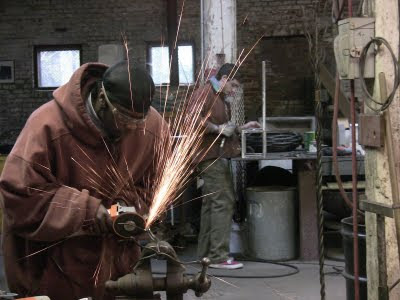 Posted by Trenton Atelier at 7:24 AM No comments: 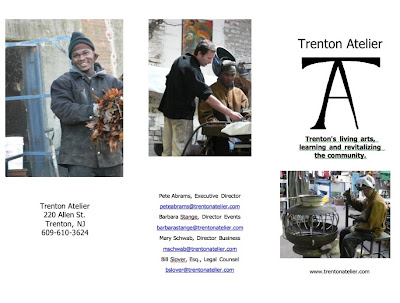 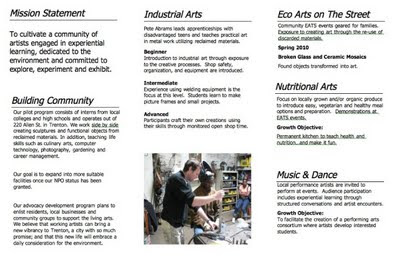 Posted by Trenton Atelier at 10:27 PM No comments:

but what is it really about?

Is there a group of people out here who want to build a community around the arts?
a space where creation,exploration,experimentation and exhibition of ones talents can be realized.
I see people teaching and learning all manner of physical arts,be it metal fabrication ,wood working or what have you.But with an emphasis on treading lightly on this planet.
How can we do what we want with what less?
can we build that village? where people are treated as assets ,not liabilities?Simplify simplify simplify


more later
Posted by Trenton Atelier at 8:57 AM No comments:

New Jersey currently hosts about a dozen business incubators, many aimed at specific industries such as high tech, bio-tech, and pharma start-ups. Many people might think that is a large number of incubators in a small state, but Pete Abrams sees the need for an incubator for a different type of industry — art. He is spearheading a group interested in turning one of Trenton’s unused former manufacturing sites into a home that would nurture the entrepreneurial spirit of people in the art industry.

The project, named the Trenton Atelier, would make use of about 60,000 square feet of the former Roebling complex, located across the street from the Sovereign Bank Arena. Abrams is specifically interested in the complex’s former distribution center building, a single-story space which currently is missing much of its roof.

An artist himself, Abrams works with “found objects,” particularly wire cable. He refers to himself as a “reverse engineer,” taking objects other people see as junk and turning them into something useful. Examples of his work are scattered around his studio, Modern Metalwork, in downtown Trenton, where old tires have been turned into a sculptural garden tower filled with tomatoes, peppers, and squash, and recycled elevator cables have found new life as graceful fire pits, tables, and chairs.

Abrams describes his career path as “circuitous.” He attended Cornell and Evergreen State College in Washington State before receiving a degree in art and architecture from the University of Wisconsin.

After college he lived for a time in the south of France, and in Wisconsin, California, and Oregon. He worked at the Johnson Atelier at Grounds for Sculpture in Hamilton, sculptor J. Seward Johnson’s factory. His experiences in Hamilton and at a similar program in France have helped shape his ideas for an atelier, or collaborative artists’ workshop, located in the capital city.

Revitalizing Downtown Trenton. The artists’ incubator is just the first part of Abrams’ vision. He sees it as a part of a larger whole that would help to revitalize downtown Trenton by bringing in people who would work, live, and shop there. “I hear about a lot of redevelopment plans that involve things like stadiums,” he says. “Yes, stadiums bring large numbers of people into an area for an event, but they don’t stay there. They drive in, go to the stadium, and leave.”

But developing a space where artists could work would bring people who were in need of homes. Once they are living there they want to have shops and restaurants nearby also. “You start to develop a community,” he says. Galleries and restaurants would also attract people from the surrounding area who right now have no reason to come to Trenton “other than occasionally for jury duty.”

Abrams stresses that the incubator would not just offer space for a dozen or so artists, it would also create other jobs as well as training opportunities for young people. Apprentices could learn trades such as metalworking. “They could take these skills and get other jobs or become artists’ themselves, creating the need for new spaces like the atelier,” he says.

In addition to artists’ work space and a gallery to show the work, the building is also perfect for a variety of performing arts, he says. A former loading dock could easily become a small stage. “There are dozens of small dance troupes in the area that are always looking for someplace to perform,” he says. Space could also be made available for classes for anything from dance to yoga.

Abrams also envisions a kitchen/garden/cafe area at the atelier where organic food could be grown and used. The kitchen could also be a place to teach cooking classes and train young people in the restaurant business. It could also be a community building area for the artists in the atelier. “I remember working at an atelier in France,” he says. “Every day everyone there would sit down together for lunch. At first it seemed a bit of a waste of time to me, then I realized that sitting down to eat together with people every day built community and connections.”

First steps. But before any of these things can happen, there are a number of very practical steps that Abrams must walk through.

The MCIA currently owns the property, which until recently had been in litigation when the previous developers, the Manex Corporation, failed to develop a movie studio on the site. No work was ever done on the site by that company, which also failed to make mortgage payments on the property, and in 2008 the MCIA regained control of it.

Abrams admits that restoring the building would be a major financial undertaking, but he points out that his plan requires a less finished space than many of the other possible uses for the property which have been suggested by interested developers. These include condominiums and retail shopping.

“Artists require great natural light, which the building already has, and plenty of wide open space, and not much else,” he says. While he has heard some estimates of a cost of $200 per square foot to rehabilitate the building, he plans to get creative and “take at least one zero off that estimate” by using volunteers and donations where ever possible. “I’ve talked to one company that builds no-flow toilets. They’d be interested in donating to the project so they would have a place to showcase their product,” he says.

“Right now this area is just a huge wasted space. The building’s been untouched for about 30 years and the people of Trenton deserve something better. They deserve something that will bring life and passion and work to their community. I think something like the atelier project would do that.”
Posted by Trenton Atelier at 8:42 AM No comments: 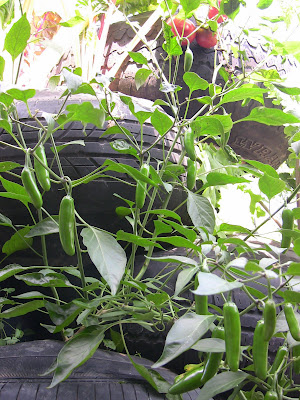 its not all about the produce
just happy for the rains
Posted by Trenton Atelier at 6:43 AM No comments: 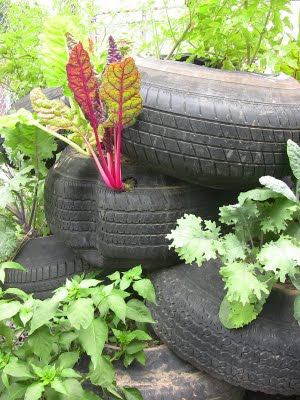 The Trenton Atelier Mission Statement
To create a community of artists to work within the parameters of the planet,
dedicated to exploration, experimentation and exhibition.
We are presently working out of a factory at 220 Allen Street in Trenton, NJ. This pilot program consists of interns from local colleges and high schools as well as apprentices from such diverse backgrounds as classically trained chefs from France and art teachers from Ghana, to career challenged locals with criminal backgrounds.

Here we all work side by side creating not only sculptures out of predominantly reclaimed materials, but also teaching life skills such as a culinary arts, computer training, photography, (vertical) gardening and career management.

Our vision is to expand this model incorporating the diverse and rich cultures inherent in this area. We must try new techniques, processes and ideas to live within the constraints of the earth, as well as ways to live in unity with our fellow citizens.
Posted by Trenton Atelier at 5:31 PM No comments:

okay, so i can't do everything..
but we keep at it
Posted by Trenton Atelier at 6:37 AM No comments:

Posted by Trenton Atelier at 9:29 AM No comments:

PARTY
Conceptual Tour
Sunday June 21st 12-4 pm
Under the Tent
Under the Manex Water Tower
33 Clark St. Roebling Complex
What’s the deal? We are creating a working industrial arts community,
which will expand into holistic healing arts center, retail
sales spaces, gallery spaces, dining, and mixed use living loft
spaces.
How’s it work? Artistic investment plays a central role to urban
gentrification.
Why not! Trenton deserves a 1st rate eco-conscience art, retail and
manufacturing facility. It provides positive impact for the local
community and addresses environmental issues we face as well.
Need some help here? There is a lot to do.
Join us in any way you can!
Refreshments
Suggested Donation $20
Peter Abrams 609-610-3624
Trentonatelier@gmail.com
Barbara Stange 609-540-0518
simplynaturalliving@verizon.net
Trenton Atelier
Coming soon
www.trentonatelier.com
Posted by Trenton Atelier at 7:08 AM No comments:

Posted by Trenton Atelier at 12:52 AM No comments:

can be reached at

trentonatelier@gmail.com
Posted by Trenton Atelier at 11:50 AM No comments: 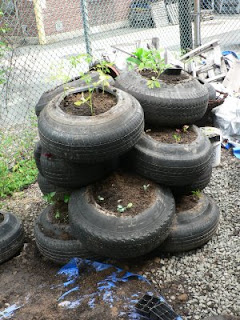